The Lion King - Circle of Life 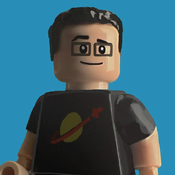 This set is based on the Broadway musical version of Disney’s The Lion King, specifically the opening number “Circle of Life”.
The musical version of Disney’s The Lion King has captured the hearts of audiences around the world since it opened on Broadway in 1997.  With its timeless story and stunning stage design, the show has become one of the most successful and beloved productions in theater history.  The musical has been running for over 25 years, making it one of the longest-running productions in Broadway history.
The show's universal appeal and enduring popularity can be attributed to its top-notch production values.  The set and costume design in the Lion King musical are key elements of the show’s achievement.  The idea I’m presenting here is based on these key elements of the show. Julie Taymor is the director, writer, and designer of The Lion King musical.
For this set, I followed an important aspect of the musical in which the actors playing the animals are not completely covered up by the costumes.  As such, I used the Minifigures as part of the brick-built animals.  The animals I picked to represent this scene are the elephant, the rhino, the giraffes, the rams, and flock of birds.  Of course, for “Circle of Life” I had to include Rafiki, Mufasa, and baby Simba as well!  I envisioned this as a play set, and I have Pride Rock on a turntable just like in the musical.  The lighting for this musical is magical.  I attempted to capture that atmosphere by using gradient colors of the sunrise on the back wall and the side panels.  I decided not to build an enclosed theater in order to allow for easy access.
The circular screen representing the sun is built with technic link threads and the entire screen is flexible at each thread connection. It is attached on top to a cylindrical rotating drum that functions like a garage door lift. Just like the opening of the musical itself, the sun slowly reveals itself as it is being lifted up from the floor.
Also of note, Lion King cast actors from a variety of cultural and geographic backgrounds, focusing particularly on actors from Africa.  The Lion King has a long history of casting actors from Africa in leading and supporting roles for its many productions across the globe.
Thank you for reading this…I hope you can give this project your support.  Please share this with anyone you know that might enjoy it!