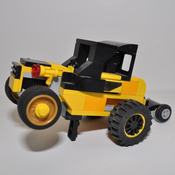 By lego car guy
25 comments
Hey, thanks for checking out my model of the Triceratops! Triceratops means "three-horned face." It was named by Othniel C. Marsh, and American fossil hunter. This huge dinosaur could way up to ten tons. The Triceratops was common 65 to 70 million years ago, in the late Cretaceous period.

Now for my Lego model of the Triceratops. Believe it or not, It actually took a while to build this model. I began with the landscape that is also a platform for the dinosaur. For this, I used lots of plant and rock elements. I also built a stream to make the landscape more interesting. After building the landscape, I started work on the dinosaur itself. The hardest part in doing this was definitely building the head. I rebuilt it many times until I knew I had it right. I used 1x1 slopes for the protective neck frill(behind the horns) and I used the same piece along with some plates to make the horns and the beak. I used lots of chunky bricks and slopes for the leg and tail muscles to show the strength of this dinosaur. Also, to make the model more interesting and hopefully more realistic(we actually don't really know the real color of the dinosaurs), I used pieces of a lighter green for the underbelly.

If you like this model, then please, by all means support it, comment on it and leave feedback about it. I'd love to hear what you have to say about this model. And, if you liked this model, then you may like my other Lego Ideas projects, Niagara Falls and "Blower" Bentley, so please check those out too. Thanks so much for the support!