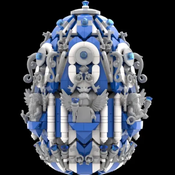 By VickBrick
30 comments
The story that I wish to tell you has its origin back in 1885. When the Tsar Alexander III offered to the Imperatrice a dedicated egg for Easter. It was and still is a treasure of jewelry which will initiate the creation of an extraordinary collection that we all know as « Fabergé Eggs ».
Beyond the treasure of jewelry that they are, they express the creativity and the talent of Fabergé him-self. This is mainly due to the way that he concidered his work as Art and the passion he put to realize them. The true expression of his creativity has been a source of inspiration to me.
Kheira Chakor said once “Art is when the admiration of a work arouses in you the desire to do the same”. That is why I have wished to try to realize something similar but with my own form of expres-sion: by substituting gold, silver and gemstone by different types of LEGO bricks.
The most difficult exercise in this construction has been to respect the identity that Fabergé has successfully express through each one of his Eggs:
-Each one is unique.
-Each one has its own personal signification.
-Each one keeps a specific treasure for its owner which is secretly protected by the Egg itself.
You have probably understood it but the LEGO that I would like to present you today is a new and “modern” version of my own Fabergé’s Eggs. And here is the first one of my conception: The Angel Egg.
If you spend some time to seek carefully constructions made by LEGO builders (AFOL are obviously awesome). You could quickly understand that many of them could pretend to be named as « Artist ». After the release of « Botanical » and « Art » collection I start to sincerely think that LEGO could have their own creation seen as creative Art object of decoration, like Tutankhamun by Swan Dutchman (https://ideas.lego.com/projects/831026df-171f-434c-b184-498d487c75ae)
So, it is without any doubt or pretension that I strongly believe that many amateurs of Arts, LEGO or both will wish to add this Egg to their collection or decoration. That is why I think that Egg like Fabergé’s Egg would be an awesome set or collection of set.
The Angel Egg:
The Egg can be seen in this Video with the different parts of the Egg:
The first egg that I would like to present, is an Egg inspired from Fabergé’s Eggs. As Fabergé did with each one of his eggs, this one has its own specific references and signification that you can find all over the Egg and Pedestal ornaments:
-Angels, as mentioned in the name of the Egg. There are 5 types of Angels represented on the whole Egg, (Figure 8, Figure 9 and Figure 10).
-Keys,
-Blue gemstones.
The Angel thematic has been chosen because this Egg was originally dedicated to my own little Angel. I choose to associate Angel with Keys. Those Keys can be found all over the ornaments of the Egg but also on the Pedestal of the Egg (Figure 3 and Figure 6). I have specifically chosen keys because they are the keepers of hidden and secret treasure. Here, the treasure remains hidden inside the egg in order to respect the identity of Fabergé’s Egg. The color blue for gemstones and bricks has been chosen due to a personal reference: Eye color of my own Angel.
The full construction is made of three structures which can fit together to form The Angel Egg (Figure 7):
-Pedestal (Figure 8),
-The Egg, with two substructures:   -A lower part (Figure 12)
-An upper part (Figure 15)
The Egg: (Figure 2 and Figure 3)
The egg which is the main part is composed, as said earlier, of an upper and a lower part (Figure 7). They are completely independent (Figure 6 and Figure 7) and they perfectly fit one to another. The hexagonal shape (Seen Figure 11 a) and b)) of the Egg avoids the upper part to move freely when they are fitted. On the faces of the Egg, you can find two Angels which appear alternatively (Figure 9 and Figure 10). They represent a male (Figure 9) and a female (Figure 10) Angel which watch out for the Treasure inside. Here the personal meaning is that a father and a mother are proecting and keeping safe the new life inside which is secretly oncoming.
Hide inside, in the center there is a golden Egg (Figure 14). There is two meaning here with the golden egg. The first one is a homage to the first Egg of Fabergé in 1885: The first Hen Egg. And the second is a tribute to the authentic function of an egg: To host and protect a new life oncoming.
The characteristics of the egg are (Figure 4 and Figure 5): An overall height of 19,1 cm with a maximum diameter of 16,2 cm. It is composed of 1617 bricks.
More specifically: The lower part is 12,1 cm height for 1058 bricks. The upper part is 10,2 cm height for 559 bricks.
The Pedestal: (Figure 8)
As expected, the main purpose of the pedestal is to support the Egg.
It is structured with two equilateral triangles (one small and one large) as you can see Figure 5. The overall forms a hexagonal shape to esthetically match with the hexagonal structure of the Egg.
On the largest triangle there is an Angel to each apex of it (Figure 8). Each one of the Angels represents personality traits that I would like to convey:
- Creativity (Figure 8 a))
- Knowledge (Figure 8 b))
- Curiosity (Figure 8 c))
The characteristics of the Pedestal are (Figure 4 and Figure 5): An overall height of 13,1 cm. The edge of the largest triangle measure 14,7 cm and the length of each median is 12,9 cm. The pedestal is composed of 409 bricks.