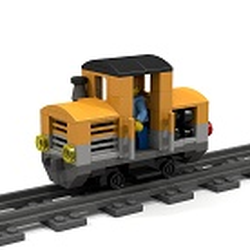 Since bricks are bricks, going down in size is always a challenge (at least for me) :)

But I love trains and challenges, so time has came to create something below the standard 6 stud width. Inspiration came from those cute narrow gauge trains that were originally used for industrial purpose but now they carry tourists in forests, mountains where high speed and ultimate comfort do not count. What really counts is the feeing of a nostalgic old, noisy locomotive, being close to the nature, and riding an open passenger car.

This was my goal that became a not over decorated 5 stud wide little diesel engine with an 5 stud wide open and 6 stud wide classic passenger car. Each car has 3 seats so the whole set includes 6 passengers and a driver. And the name, Her Fragility came from the structure of the engine which is so to say fragile a bit from a structural integrity point of view. :)

Anyway I hope you will like this little train:)