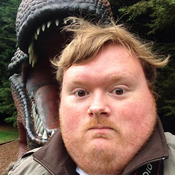 THE IDEA:
Firstly, I’ve used the Lego Digital designer to create my idea. I originally wanted to design something large and bold however after consideration I decided to stick to the basics.

I decided to draw upon nostalgia for this particular objective and so decided to base it upon what I consider to possibly be a much-forgotten Lego range, namely M:Tron, perhaps my most favourite range because it’s sets were the first I ever received as birthday gifts back in the summer of 1990 (I was six).

So, I introduce the “Star Hauler” a 4 person Bi-Wing shuttle craft with crew (villains included as an extra idea). The concept is an Anti-Gravity vehicle used to move M:Tron “Employees” and/or captured Blacktron agents around their mining planet.

On the rear of the vehicle hanging from magnetic supports are the compartments used to transport the precious minerals that M: Tron workers mine, after all, M:Tron was and is still very much all about the Power of Magnets.

The Minifigures shown are the M:Trom Supreme Commander, her “Operations Android”, an augmented M:Tron Pilot and M:Tron Security Captain.

Also, shown, a Blacktron “Grunt” (in the heavy armour) and a Blacktron “Mercenary” for hire. Finally, as one extra option, I’ve included the Blacktron Overlord, my idea to introduce an overall leader for the “villains”.

I thought I’d also have a go at updating the original logo and refer to this idea as M:Tron – Generation 2.0. I really hope you like my idea, and would love to know what you think.

I may have a few other ideas on the way, but this being my first, I felt I just had to make it M:Tron.

May I thank you for your time and support.