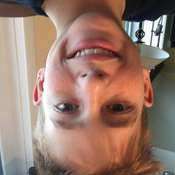 Lanthrax started his life as an amphibious creature on his home world, and strove to make himself a bionic superior to his species.  Crazed with his obsession, Lanthrax, more machine than himself, became a warlord and preyed on destruction. He soon conquered his planet and ruled with the infinity scepter.

I had a blast making this mechanical beast. I was always intrigued with boundary between machine and man and was a perfect outlet. The set comes with