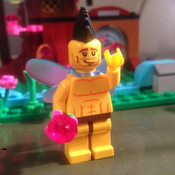 Avatar - the Last Airbender is one of the most acclaimed animated series ever produced.  The second series of Avatar - The Legend of Korra went on to became more popular than the original.

This is the best of BOTH Series.  "LEGENDS OF THE AVATAR"

Appa is a fully articulated Flying Bison to call your own.  He comes complete with his Avatar family including Aang the AVATAR and last Airbender.  Ang's pet Momo and friends Sokka, Katara, Toph, and Zuko also come with the set.  Appa has a storage area inside to hold all of the figures and his beloved bucket of cabbages!

Naga is the pet Polar Bear Dog that Korra rides.  He is completely poseable and Korra can ride him in the saddle with the harness.  There is also Asami, Mako, and Bolin from Team Avatar to help the Avatar on her adventures.

Accessories include an Air Shield, an Air Ball for Ang to ride on, Fire, Water, a chunk of Earth, Ang’s Flying Glider, and a bucket of cabbages for Momo and Appa to eat.

You can recreate all of your favorite Avatar scenes from both Generations.   They could also add a car to the Korra half to give the other characters something to ride in.