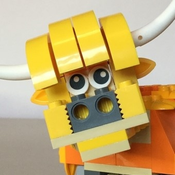 This idea is inspired by the movie The Greatest Showman, a musical that was first released in cinemas in late 2017. The film's story is based on the real-life PT Barnum, an American credited with creating the first circus entertainment. The idea portrays some of the characters and scenes from the movie, including a circus elephant, a bearded lady, a trapeze artist and PT Barnum and his fictional business partner.

The set involves about 200 pieces. These include bricks, but also pieces that allow the elephant's head, trunk and legs to move. The trapeze also swings. The elephant and the rest of the set would present builders with a medium build. As well as the elephant, builders would be able to construct a trapeze and a ticket booth.

The rear of the main set has a small hidden feature. It is a representation of a back alley with an apple and two letters. These are items are important to PT Barnum's younger self in the movie. The overall set would appeal to fans of both building with Lego and of the film.