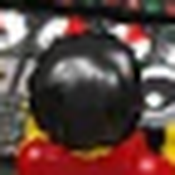 By Trukko
28 comments
That's my favorite spaceship deigned by me when I was a kid, starting from some pieces of an old M-Tron Lego set I invented this in the '90s; and now, every time I reopen my LEGO box to play with my daughters it is the first thing I build, my hands probably know how to do it by themselves. I believe it has a very beautiful shape which makes it easy to handle, while the powerful engines and variable attitude wings allow it to fly fast both in and out of the planetary atmosphere. The wide range of missiles and laser beams guarantees sufficient firepower even for solo recon missions, while the two side antennas are dedicated to the broad spectrum analysis of planetary surfaces. Obviously this time I took advantage of the digital capabilities and of the full new kind of bricks created by LEGO in the last 20 years, to enrich my little spacefarer with some aesthetic detail. The space travel controls in the cockpit and the air vents on both sides of the screen window are some of my favorite details in this version but I also like a lot the general aspect of the ship, looking at it from every angle or side you can always taste its character and attitude for speed...