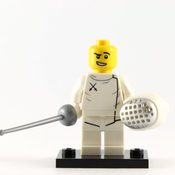 Biplanes ATTACK! is a simple tabletop game of aerial dogfight, set in the grand era of early aviation.
These nimble little aircraft are fun to master, strategic to fly, and quick to battle for young and old alike. Chocks away, and watch out for mid-air collisions!

Simple to build and easy to learn, the game is designed to use either a Lego or standard 6-sided die. A standard game will last between 5 and 15 minutes - fun & furious!

How to Play
The game is played in 'Rounds'. Starting with the oldest player, then in clockwise order; all planes Move & Attack until it is the first player's turn again. This is one Round.

Any plane who was Hit removes one Barrel (1x1 round) from their stand-plate.
If you have no remaining Barrels your plane will crash at the end of the Round & you are out of the game.
*NOTE* Even if you are going to crash, you may still move and attack as normal until the end of the Round.
Repeat until one or no Players remain.

Movement
There are two types of manoeuvre:

Collisions
Templates must be placed around opponents stand-plates. If a template cannot be placed without overlapping an opponent stand-plate, the move is completed but a mid-air collision has occurred, and both Planes suffer a Hit.

Your plane's guns have a 0° Firing Arc (they shoot straight ahead); follow the line of the two centre studs of the Plane's stand-plate (imagine the Template out the front in a straight line) – if it passes through any part of an opponent's stand-plate you may Roll for Attack.

Attacking is done using one Lego (red & green) or standard (numeric) 6-sided die. Attacker rolls first to attain Odd(Red) or Even(Green), then the Defender rolls to counter. If the Defender matches the Attacker's roll (Odd/Odd; Red/Red) they have successfully evaded & the attack Fails. However, if the Defender does not match the Attacker (Odd/Even; Red/Green), the attack Hits.

Damage
All Planes have 4 Hit points (Barrels on stand-plate). Once a plane has been Hit, they must remove 1 Barrel.
If a Plane has been successfully Hit 4 times they are Destroyed.
Mid-air collisions count as an automatic Hit to both Planes.