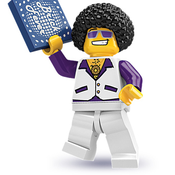 By WOONG FROM KOREA
12 comments

It really existed until 1970s when Korea was poor.

And I think showing rickshaws can be a way to make you remind the old scenery.

It was just a transport, but can be a nostalgia now...

3) Why I believe it would make a great LEGO set.

There was no lego sets described the old sceneries, makes nostalgia before.

I think it can be a great LEGO set which described old thing.

By WOONG FROM KOREA
12 comments