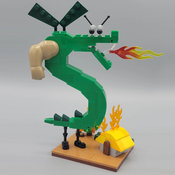 Everybody to the limit! From Homestar Runner, it's the greatest criminal mastermind and email answerer of all time: Strong Bad! Come on, fhqwhgads! Help Strong Bad's awesome awesomeness become the next LEGO Ideas... idea. With this Strong Bad megafig and his iconic green monoblock wraparound sunglasses, you can recreate moments from his classic music video "Everybody to the Limit (Come on fhqwhgads)"!
But wait, there's more! You'll also build... TROGDOR, the Burninator! With his one beefy arm, wing-a-lings, and a burninated countryside, he radiates majesty and consummate 'V's.
But wait again! There's even more more! Also included is a side-build of Strong Badia (where their tropical breezes blow), featuring population: tire!
Strong Bad is the "villainous mastermind" from the classic web cartoon, Homestar Runner. Assisted by his sidekick The Cheat, he is known for the pranks and scams he perpetrates on the other characters and for his animated segment "Strong Bad Emails" where he answers viewer's questions from his trusty computer. Strong Bad debuted over twenty years ago and helped define the surreal comedic tone of the early Internet.
Styled after a classic lucha libre mask, his "dangeresque" look translates perfectly to a LEGO megafig! This megafig comes with exclusive "mouth a-opening action," so his mouth can open and close as he answers your emails and makes fun of your spelling and grammar. Trogdor debuted on January 13, 2003 in the classic cartoon "Strong Bad Email #58 - Dragon." "Everybody to the Limit (Come on fhqwhgads)" hit the charts on July 1, 2002 and won the Cheat a trophy.