By Xendor
3 comments
First of all, I should inform you that, because the Mask of Life (Mata Nui Legends version) isn't on LEGO Digital Designer (LDD), I replaced it with a blue Hero Factory mask.

Many years ago, during the Core War, the Great Beings created the Mask of Life, the Ignika, so that it can be used to recharge Mata Nui's life force. After its creation, a Great Being grew curious, touched the mask, and was cursed by the uncontrollable ability to give life to anything around him. The demands of his "creations" drove him mad, and he was locked away.

During his time in prison, he began blaming the Ignika for his imprisonment, and began creating the Akingi, the Mask of Death.

Now, Teridax has gained a new form, and taken the Mask of Death from its cell. In response, Ignika has created a new body for himself, and has gone in search of Teridax, before he is completely one with Akingi. 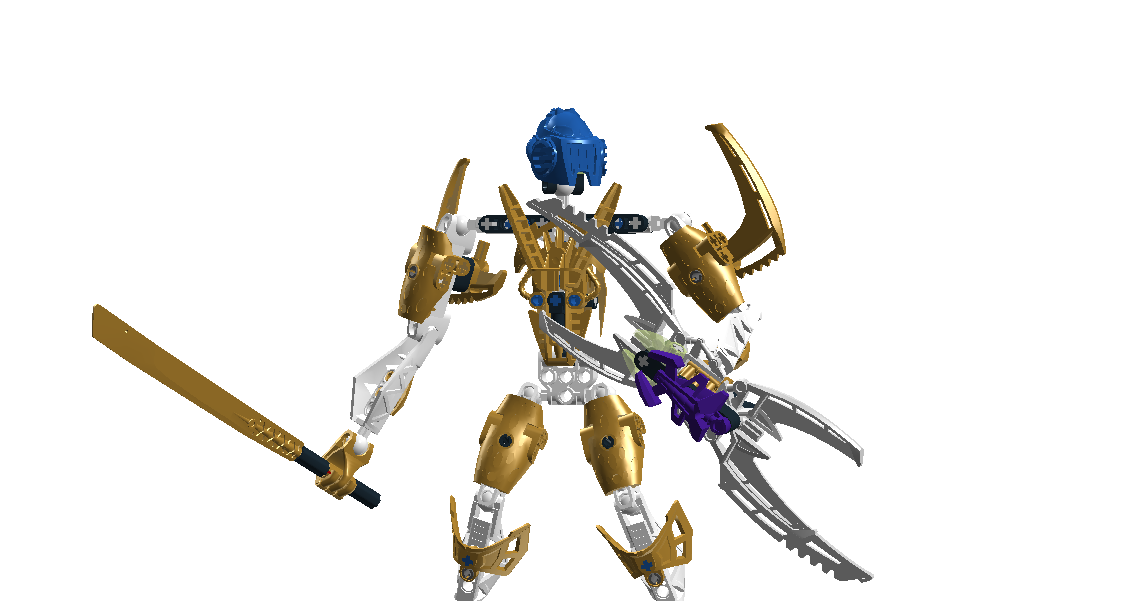 Toa Ignika has returned in a new, stronger form. His golden armor radiates with the same energy as his mask... or is it him, I never could get that right. Is he the mask or is he the Toa? Hmm. 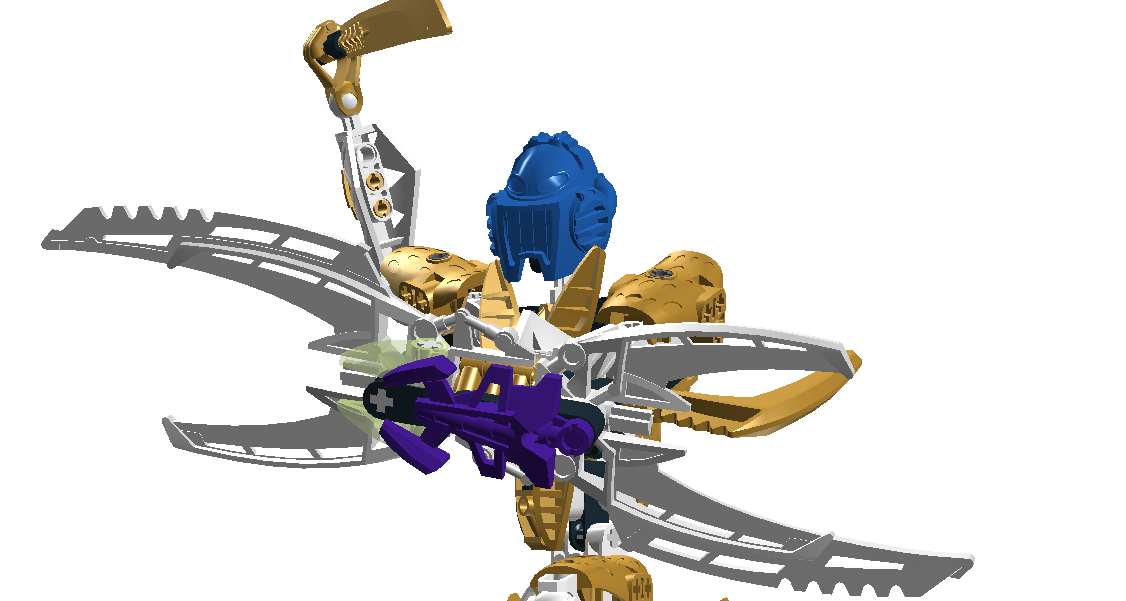 Anyway, he is equipped with a new, more powerful Lifeblade. This blade is capable of blocking any weapon, even the Unknown's gaseous staff. Also, Click has returned to become Ignika's companion and shield. 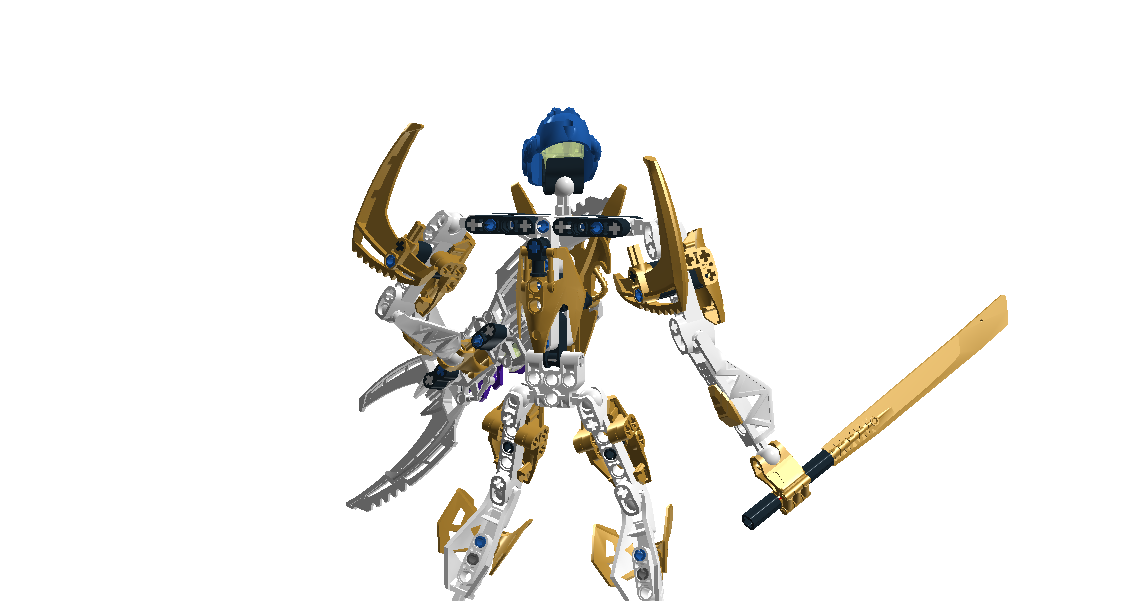 Like the unfortunate Great Being that received the power of Ignika, Ignika is able to create anything around him into a life force. However, he has more control over it, choosing what to bring to life and what its purpose is. 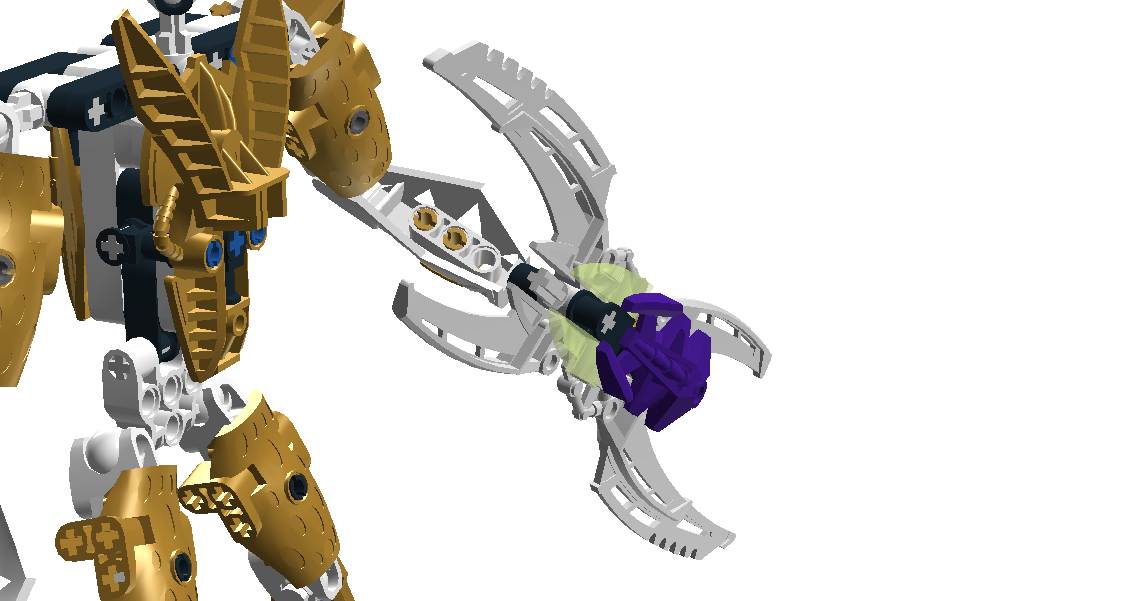 Once again, sorry for not having the actual Mask of Life on here, but the only Bionicle masks on LDD are Tahu Star's, Hydraxon's, and the mask from the vehicle-driving Agori from 2009.

Missed last chapter? Then go to the Bionicle: The Return - Teridax.

Gali: Can you tell what was going on here, Hewkii?

Hewkii: All I can tell you is that our suspect stopped here, and stood here for about ten minutes. Then he went off to the right and… disappeared.

Hewkii: No. Whoever this is has the power to either fly or teleport.

She then went over to Jaller.

Gali: Jaller, you were touched by the energy of the Ignika, right.

Jaller: The Ignika is what made my team and I Toa Mahri.

Gali: I’ve noticed that those who have touched the Ignika, or felt its energy, have a bond with it. I’d like to see if you have one.

Gali: If there is a connection, I should be able to sense the energy passing through water… if I surround your head with it.

For a second, Jaller contemplated on it.

Gali: You understand that the water will…

Jaller: I know the consequences. But there may be much more if we don’t do anything.

Ignika had teleported to the Maze Valley, which was now underground, hidden from all of those on the surface.

Ignika knew that a Legendary Mask had been taken here. He could sense the power. But what mask was it.

It wasn’t any mask he recognized. The power was… different. Similar to the Great Being’s creation, but… not.

After reaching the outer edge, Ignika teleported into the center structure.

Ignika turned around to see a titanic figure holding a mask.

Ignika: I am Toa Ignika. And you?

Titan: I am the Lost One. I walked in the darkness, and hide from the light. I am the Lonely Guardian of Time.

He then lifted a mask that Ignika had never seen before. From it radiated the energy that Ignika was drawn to.

Titan: I am Voporak. And this is the Mask of Time.

Teridax: I appreciate the “master,” miss Unknown, but could you…

Suddenly a blast of sand-like particles blasted him in the face.

Akingi: What was that?!?

Unknown: I was really hoping to save this for later. My father gave me more than impenetrable armor. I can control anything.

Suddenly, his arms grabbed hold of his sword, and held the blade to his throat.

Unknown: Anything, so don’t even think of trying to betray me.

Unknown: What do you mean?

Akingi: You can control anything made of matter. But can you control… death.

Suddenly, the entire room went dark and cold. Slowly, the Unknown could feel her life energy draining. She focused on the energy, trying to hold it in. But to no avail. Her powers were indeed useless against Akingi’s powers.

Akingi: I was created by one of the most powerful Great Being, and given the powers equal to that of the leader’s greatest creation. So I knew exactly what your powers were, and how they work, as soon as you entered my prison. So don’t YOU dare think of backstabbing us.

Ignika: Voporak? Weren’t you once a Dark Hunter?

Ignika: Sitting on an altar for thousands of years, and hearing the Turaga tell the legends to every new generation has taught me lifetimes of knowledge.

Voporak: Ahh, I get it. You’re not a normal Toa, are you.

Voporak stroked the Mask of Time.

Voporak: Yes. I see now. You’re Ignika, the Mask of Life. Impressive. I didn’t know you could make your own body.

Ignika: You must’ve been secluded for a long time then. This is my second body.

Voporak: Indeed. Sounds like a lot has been happening since I went into hiding.

Ignika: Why have you been hiding?

Voporak stopped, and stared at Ignika. He stared at him, holding the Mask of Time in his hand for a good amount of time.

Voporak: Have you noticed anything strange?

Ignika looked. There, he saw a fly right in front of his face. Only it wasn’t flying around.

It was stuck in time.

Voporak: I’ve accelerated our perception of time to such an extent, it seems like everything around us is frozen, while I’m holding our aging progress back.

Ignika: So you hid to keep the power to yourself?

Jaller: I’m going to be keeping a flame inside of me in case something goes wrong.

Gali: Okay, Kiina. Create a layer of water along his surface.

Kiina touched the ground with the tip of her staff. Slowly, water trickled out of the tip, and flowed over to Jaller and began encasing him. As the water moved up, Jaller’s limbs began to glow a slight red, but were cooled down to safe levels by the water.

Slowly, she began waving her arms over the water, her palm wide open as she tried to sense the energy connecting Jaller with the Ignika.

Kiina dropped the water, and Jaller shot a pillar of fire into the sky.

Jaller: Had to let the heat go somewhere.

Ignika: What do you mean?

Voporak: Well, you see, after I got the mask from the Order of Mata Nui I felt a strange connection develop between us. Finally, I realized the destiny that the Great Beings had intended for me. I was to become guardian of the Vahi, the Mask of Time.

Ignika: So that’s the Vahi? Impressive.

Voporak: Isn’t it? But, as time moved on, I began to realize that the mask has a draw back. In order for you to become what the mask needs you to be, you must face your past. And my past is filled with darkness. I felt the torment and suffering of every victim I’ve killed, the grief of every child I stole. I saw the villagers in their homes I set on fire, my brothers I refused to save. All of this taught me what my path had brought me to.

Voporak then looked directly at Ignika.

Voporak: So you see why I have to make sure you’re the real thing.

He then pounced, and pinned Ignika. But instead of struggling, Ignika stayed still as the Mask of Time was placed on his face, nose to nose.

Suddenly, all of Ignika’s past was revealed. His creation. The lonely cavern. Voya Nui. Mahri Nui. His first time as a Toa. His sacrifice. All of it.

After looking through all his memories in what seemed like ten minutes, Voporak pulled the Vahi away.

Voporak: Well, you’re the real deal. So tell me, what do you want?

Ignika: I need to take the Vahi back to Vakama. We need to find the Toa of Time.

Voporak stared at the mask with distant thoughts on his mind.

Voporak: So many years. I thought it would be so easy to part with it, but now I find myself… sad. Ha, a sad Dark Hunter. How strange.

Ignika: You can always come with.

Voporak took one last look at the Vahi, then held it out.

Voporak: No. It is not time for me to leave, yet.

Ignika took the mask, and stared into Voporak’s eyes. In it, he could see years of darkness and shame.

Ignika walked out of the structure, and teleported away. Meanwhile, Voporak sat on a throne as he contemplated over the vision the Vahi showed him.

A large battlefield, with Toa, Dark Hunters, Vahki and Rahkshi corpses all across the battle field. Standing among the wreckage were four figures, three of them standing together, facing a large, unknown rahi. It was huge, in the form of a crawling rahi. It was even larger than the dragon rahi that came through here a few hundred years ago. Everything about it indicated shear strength and power. And from the way it was looking at the three figures, it wouldn’t stop till everything was dead.

Voporak: Was that the future?

Hewkii: I wondered why you spun around like that. Your connection must’ve gotten stronger for some reason.

Jaller: When I’m able to walk on two feet steadily, then we’ll laugh.

Kiina: Well, no hurry. Not like I have a guy twice as heavy as me on my shoulders.

Malum: Is that a joke? Or are you being sarcastic?

Malum stared at her for a second, then turned to Tarix.

Tarix: I think you should take the load from Miss Pouty Face.

Kiina immediately straightened up, and started walking ahead of the group. Tarix then winked at Malum, and they headed back home.

Teridax: Now that we’ve got that settled, can we move on to the issue at hand.

Unknown: And that is?

Teridax walked over to dark corner of the room, and reached into the shadow. A screech was heard, and Teridax pulled out a strange worm creature.

Unknown: What is that?

But Teridax didn’t answer. Instead, he walked out of the chamber, and opened the back of a Rahkshi.

The Unknown then got an idea.

Unknown (thinking): Akingi, can you still hear me?

Unknown: What is that?

Akingi: It’s a Kraata. These things are the brain of the Rahkshi. But how they’re created is a bit difficult to explain.

Teridax closed the Rahkshi back, and watched as the Rahkshi became mobile. It stood up, and looked Teridax in the eye. It was a silver Rahkshi, and it carried a staff with a pick axe-head on one end and a drill at the other.

He then turned to the Unknown.

Teridax: One down, over ten million to go.

Go to Bionicle: The Return - Toa Kolhii for Chapter 10.