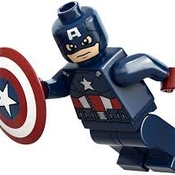 By Captnbrick10
3 comments
Meet Milo Murphy, a kid whose life is under Murphy's Law: Anything that can go wrong, will! Usually, he and his friends, Zack and Melissa, just have a fun time trying to avoid the catastrophes that follow him, but now they have bigger problems! Due in part to the time-traveling antics of Dakota and Cavendish, two time agents on a mission to protect pistachios, sentient pistachio plants are trying to take over the world! Now, along with Dr. Zone (no time to explain that part), they must defeat them before the Pistachion leader, Derek, leads his army to victory!
The set would come with six minifigures: Milo, Zack, Melissa, Cavendish, Dakota, and Dr. Zone. It also would come with a buildable Diogee, Derek the Pistachion, and the Giant Pistachion. The main builds are an ordinary sidewalk with a collapsible tree and a bush tire-launcher, as well as Dakota and Cavendish's time-traveling vehicle.
If you're a fan of Milo Murphy's Law, please vote for this project and comment below! I may add small builds for Milo-stones (get it?) hit, so stay tuned!