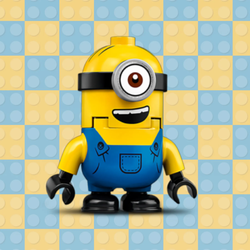 Put on your helmet and get your lasers ready as you race into a space battle! These fancy ships have lasers that actually shoot. There are three lasers on the white and blue ship and four on the UFO. It also includes a human minifigure to pilot the rocket, and an alien minifigure to pilot the UFO. On the UFO, there is also a robot gunner that does not actually shoot lasers, but still looks cool! It was an enjoyable build with a few challenges and many successes. On the UFO, I enjoyed building the covers for the LEGO cannons and on the rocket I liked building the cockpit area. The hardest part was getting the cannon to be able to be shoot without anything getting in its way, while still making it look good.