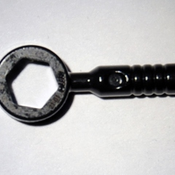 This project shows the planetary defence ion cannon of the Echo Base, on the iceplanet Hoth. This cannon appears in the Star Wars movie 'The Empire strikes back'. It is full visible, in a scene, for one second; so, an screenshot of that scene, was the refference for this project.

The main role, of the planetary defence ion cannon, was to clean an escape flight corridor, for the departing Rebel Shuttles. This move, was neccesary, because the empireal ground assault, was ready, for taking over the Echo Base, of the Rebel Alliance.

This project is an Lego Digital Designer creation. Only rebuildable techniques are used. All functions are checked.

- The cannon is 360 degree rotatable, and is 280 degree vertical adjustable; within limits by the surrounding ice rocks.

- The cannon barrel is full retractable, by an thumbwheel.

- Three doors conceils the barrel, in retracted mode; they are separately adjustable.

- An detachable ion beam, is offered.

- Two console rooms are located in the back ice rocks. And two Rebel Minifigs, in snow uniform, are recommended, for this project. Further Minifigs may be possible.

- Approx. 50 hours are the developing time.

- Only actual bricks and colours are used ( checked from inventories of sets during 8 years back).

This project is designed for the Star Wars Ucs series. It may fit along your other displayed Ucs sets; or it will find a place in your own Hoth diorama.