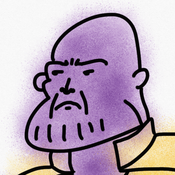 Hi guys! It's been a while. Maybe about 40 years I think? Anyway, umm... I thought that it is a good time to get back in the world! Well, LEGO has evolved a lot since I released as the first minifigure. Now days, there are so many cool LEGO models. So I made this one for myself! Isn't it cool just like others?

This model is made for this classic minifigure.

Let's take a look closer at the model.

I really tried hard to keep model look like the classic minifigure but at the same time, I mixed designs of nowadays robots (mostly on action movies). It was quite a hard work than I thought. Not too much for one side, or the other... Well, I think the result is well-balanced.

There's only space for one minifigure because, the head part is not as big as it seems. And it's round-shaped so it's a bit difficult to use empty spaces for little details, but I put details in as much as I could in it. So we have two gear sticks for each hand of a minifigure, two hologram panel displays, one instrument panel. Well, I think it's enough to control this machine. (or isn't it..?)

With this robotic design, it has to have a lot of gimmicks and, some kind of gears inside of it. I also did that on the model! As you can see the images, the chest part and the stomach part opens to show all those gears and the engine core inside. These are not must-have things but I thought it would be better with these things. And the same reason with little missiles on thighs and air flaps(boosts) on calves.

It has a lot more articulations than actual minifigures. It also had to be added for playing and posing with this model.

Attachable 2x2 brick-shaped missile launcher included with the model. I recommend you to use these when you display it as a battle-mode.

Thank you for reading the description! I hope you guys like this :)