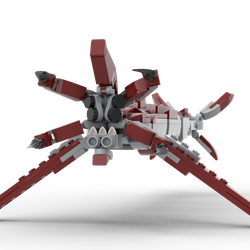 By SubnauticaMOCs
36 comments
My first submission on LEGO Ideas is a 2-model set based on the Reaper Leviathan and the Seamoth from Subnautica, by Unknown Worlds.
Design Goals:
The main goals that I went to great lengths to achieve were a combination of being physically satisfying and aesthetically pleasing. To achieve the first goal I started by making the reaper figure able to move as it can in-game; I achieved this through the use of ball sockets. The second part of this was to be made out of parts produced by LEGO currently and in their respective colors, which was a very large constraint. To make the models aesthetically pleasing, I went for accuracy and cleanliness, I spent weeks tweaking the models and their dimensions to perfect them in minifigure scale. Probably the final and most grueling constraint was to make the models affordable.
Reaper Leviathan:
The Reaper Leviathan is in many people's opinion (and also mine) the scariest creature in Subnautica, to emulate such an iconic creature I focused primarily on the face. The head of the Reaper has many moving pieces including the mandibles and the mouth, the neck is also ball-jointed. The body allows for serpentine motion, similar to how the Reaper swims in-game. The reaper is 15.8 Inches long, so a large model, it is around 300 pieces and $40 in price (alone).
Seamoth:
The Seamoth is the first vehicle available in the game and as such is very memorable to most people who've played Subnautica. The hardest part in designing the Seamoth is designing it in minifigure scale with the parts provided by LEGO. This Seamoth can fit a LEGO minifigure with most of the available hats. It has an opening cockpit with a glass dome on a hinge. The Seamoth is about 3.2 Inches long and has 81 pieces, it is valued at around $10.
Ryley Robinson Minifigure:
This set would also include a minifigure of Ryley Robinson, the protagonist and avatar in Subnautica. I've custom designed this figure to wear the reinforced dive suit without a re-breather.
The Set:
These figures are designed to interact with each other as they do in-game, the Reaper can grab the Seamoth with it's four posable mandibles. Together, the set would cost around $60, this accounts for the $45 Reaper, the $10 Seamoth, and the $5 Ryley Robinson minifigure. I've spent much time perfecting these models and developing them into a set akin to those by LEGO. If you'd like to see this as a set please support by upvoting, and if you want one of these models for yourself the instructions are available.