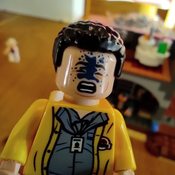 Hello and thanks for checking out my first ever Lego Ideas submission, Fawlty Towers Lobby!
It's a depiction of the famous lobby where the majority of the antics that happen within Fawlty Towers take place. Included are minifigures of all the most well-known characters: Basil Fawlty, Sybil Fawlty, Manuel, Polly Sherman and Major Gowen. The lobby does change a lot over the course of the TV show's 2 series run, so I tried to make the layout look authentic but mainly based on the latter half of the first series in order to include the moose head!
I made this because Fawlty Towers is one of the funniest and best-loved comedies of all time that influenced many, many TV shows that followed. I had a lot of fun reliving moments that came with building the Friends sitcom sets, and I decided that Fawlty Towers would be the ideal set to invoke that very same feeling.
Composed of a total of 492 pieces including all minifigures and accessories, I believe such a set would come in at an affordable price point and appeal to lovers of classic TV and comedy alike. The appreciation for Fawlty Towers spans several generations and many more to come, and I think this set would make a fitting tribute to the comedy that inspired so much that came afterwards.
Thanks again for looking at my Idea, if you'd like it to have a chance at becoming an official Lego set, please hit that Support button and encourage your friends to do the same!