The Vineyard of France 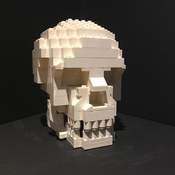 This Lego model depicts the vineyards in France. This would be during the 19th century. Here we can see that the owner of the vineyard is hosting a small party, and taking his guests on a tour of his large vineyard (this would be even larger in-universe!).

I included the recognizable French Flag atop the highest building to indicate the location of the vineyard. In total, there are 6 modular sections. the build can be separated into 3 bases; the vineyard, the taller building, and the shorter building. I included many other plants in the build other than the vineyards themselves. I made two flowerbeds; one with exclusively pink flowers and one that is more colourful. Under the entire build, there is a small basement as a brewery, where you can find a barrel, a wine glass, and a bottle.

I really enjoyed building this and the ways that I made everything work together in unison. It is so satisfying to put all 6 pieces of this model together with technic pins. The LEGO group has never made something like this, so I thought that I could bring this model to LEGO group in hopes that they would approve it (once it reaches the 10000 supporters of course). I was able to use some strange pieces for my model with some weird builds as well. For example, the plant by the front door is made from the Medusa headpiece. Though the roofs may look like they are just resting where they are, they are in a fixed position with legal LEGO building techniques.

Designing this set was fun as well. I started off with a build for one single vine, then that became three. I then proceeded to think about the building design. I researched into the structure and shape of these French buildings by vineyards, and I believe that I did a good job in capturing the overall shape and atmosphere. I hope that you enjoy the model as much as I do.