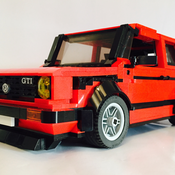 By Mbaines81_1021
47 comments
Maybe you could build…. The A Team and BA's famous van.
As a child this is the set I would of wanted.
The set includes all of the A-Team and the iconic van.
The van features an opening side and rear doors and removable roof for best access.
I have tried to replicate the original interior, in grey, with the front seats that rotate like the real van. Also inside there is a computer, surveillance equipment, wanted poster, cupboard for Hannibal’s disguises and rear weapon storage.
Hannibal, Face, BA and Murdock all fit inside.
Originally I submitted the idea in 2015, this revised set has been rebuilt and redesigned on the outside and had upgrades to the interior. I have enjoyed the challenge of trying to recreate as close to the original as possible. My favourite addition is the twin 4 tailpipes converting my original model from a 4 cylinder to the correct V8!
I think this would make a great set, to either display or for introducing the next generation to the best TV series of all time The A-Team! My son has grown up with the A-Team, and has enjoyed recreating the episodes with the Lego van.
I pity the fool that doesn't vote for this set.