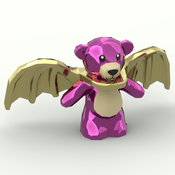 By Horbee
170 comments
The Olympic motto is made up of three Latin words:
CITIUS - ALTIUS - FORTIUS
(FASTER - HIGHER - STRONGER)
I would like to introduce my Olympic torch:

For me and I think for others, the Olympics is a powerful symbol. I thought about building upon this idea and I think sports lovers worldwide would appreciate it.
The shape of the flame is more visible if made of monochromatic cubes, but in the final version, I would use more transparent colors to make it realistic.

About the project: Approximately 39cm tall and is constructed using 417 elements. According to the Olympic Committee the Olympic rings do not represent the continents by color anymore, therefore I would enclose the continents as stickers. Certainly, the design can be taken apart into different units and can be enjoyed separately (Torch, flame, rings), I will be showing you some plans for this too. It would look great in a Modular city as a torch in the park too.
I hope you like it!
My other project: European Golden Shoe