The project of Lady Oscar is intended to be a game, a fun way to learn about the French Revolution. I tried to select the characters whose paths in life are strictly connected. At this time I'm planning other situations and environment which create the world of LEGO Lady Oscar.

WHAT IS LADY OSCAR?

The Rose of Versailles (Berusaiyu no Bara), also known as Lady Oscar or La Rose de Versailles, is one of the best-known titles in shōjo manga and a media franchise created by Riyoko Ikeda. It has been adapted into several Takarazuka Revue musicals, as well an anime television series, produced by Tokyo Movie Shinsha and broadcast by the anime television network Animax and Nippon Television. The show remains incredibly popular in Italy.
The Rose of Versailles focuses on Oscar François de Jarjayes, a girl raised as a man to become her father's successor as leader of the Palace Guards. A brilliant combatant with a strong sense of justice, Oscar is proud of the life she leads, but becomes torn between class loyalty and her desire to help the impoverished as revolution brews among the oppressed lower class. Also important to the story are her conflicting desires to live life as both a militant and a regular woman as well as her relationships with Marie Antoinette, Count Axel von Fersen, and servant and best friend André Grandier.
The setting is in France, before and during the French Revolution. In the early part of the series, the main character is the young, flighty Queen of France, Marie Antoinette, however later the focus of the story shifts to a woman named Oscar François de Jarjayes. Oscar's father, General Jarjayes, despaired over never getting a son (he had six daughters), and decided to raise his youngest daughter as a man. He trained her well in the arts of fencing, horsemanship, and medieval combat. Oscar often practiced her skills with her best friend, companion and (technically) servant, André Grandier, whom she almost always defeated. André was the grandson of her nanny and thus they spent most of their time together in harmonic friendship; near the end of the story, this blossomed into mutual love.
Oscar is the commander of the Royal Guard and responsible for the safety of Marie Antoinette, as well as the rest of the royal family. The story revolves around Oscar's growing realization of how France is governed, and the plight of the poor. Another important storyline is the love story between Marie Antoinette and the Swedish Count Axel von Fersen. The affair between the two was the subject of rumours through all of France, endangering the Queen's reputation and driving Oscar to request the Count to leave the country.
After the Count decided to leave and sign up for the war of independence in America, Marie Antoinette became lovesick. She began spending money in excess —expensive jewellery and clothes, attending balls every other night— to distract herself from pining for the only man she loved. This, in turn, weighed even heavier on the taxpayers of France, and even greater poverty spread throughout France due to Marie Antoinette's squandering of money. 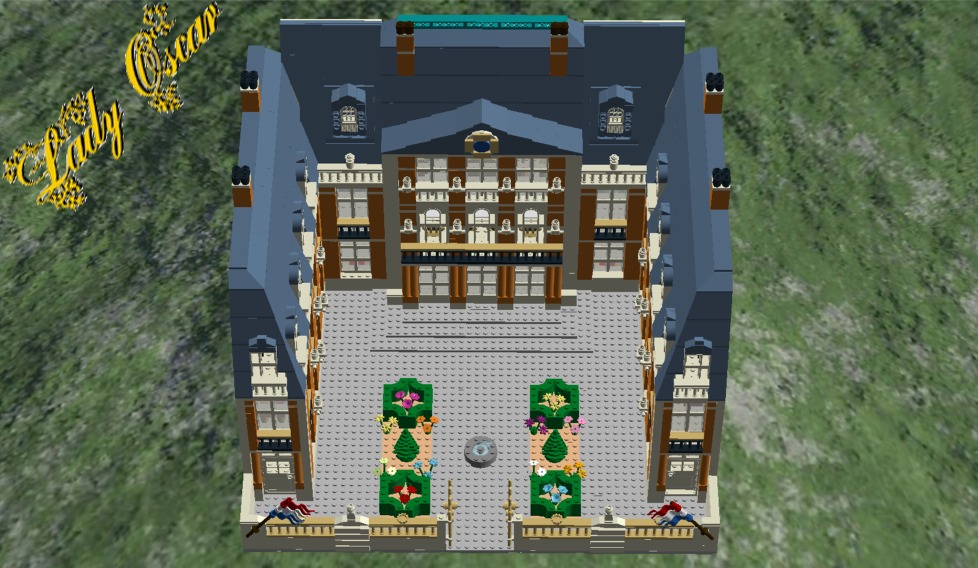 Since I couldn't reproduce the entire palace using Lego bricks I decided to build the front facade and to add the gardens and a little fountain on the front. This allows a series of alternative ways to play.
I tried to render faithfully the colours of the exterior.Most of the decoration both inside and out is in gold tones, as it is in reality.
Finally, as the set is quite big it could be part of the Collector series. 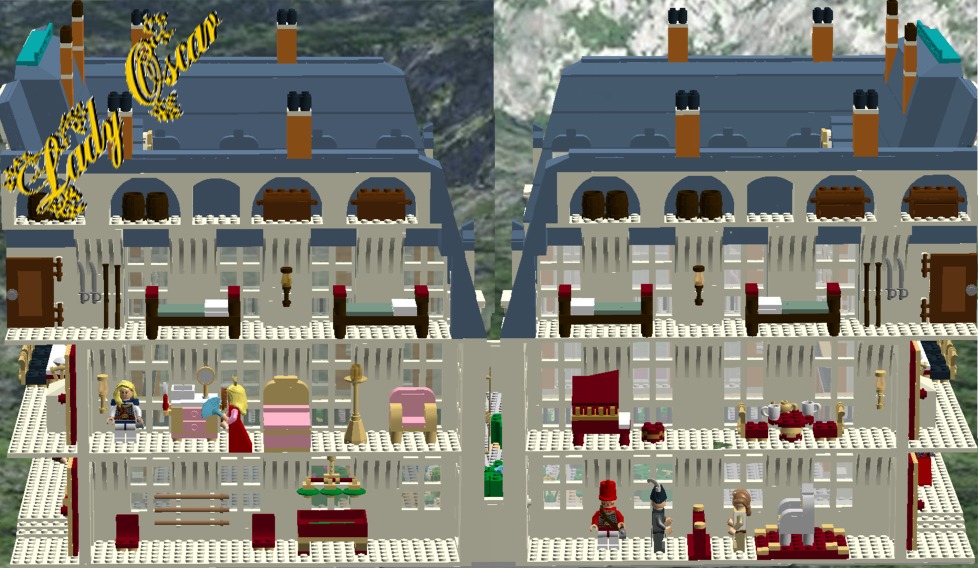 LEFT SIDE AND RIGHT SIDE VIEW

I have built three floors. I tried to be as faithful as possible to the original details, such as the colour of the dining room, the king's room and the queen's room.

Left side:
- on the ground floor there's the billiard room
- on the first floor there's the queen's room (furnished with bed , consolle and lamp)
- on the second floor there are the rooms of the Royal Guard( with beds and hangers for the weapons)
- under the roof there's a little cellar( could be used as a treasure vault as well)

Right side:
- on the ground floor there's the king's throne room (Robespierre is shown talking to the king)
- on the first floor there's the music and tea room
- on the second floor there are the rooms of the Royal Guard( with beds and hangers for the weapons)
- under the roof there's a little cellar( could be used as a treasure vault as well) 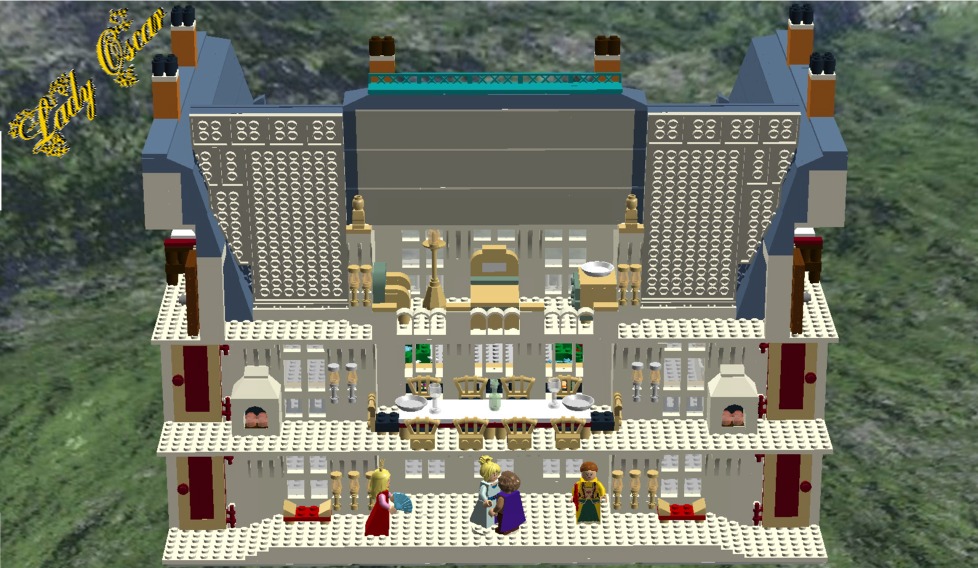 The central part is also made of three floors: 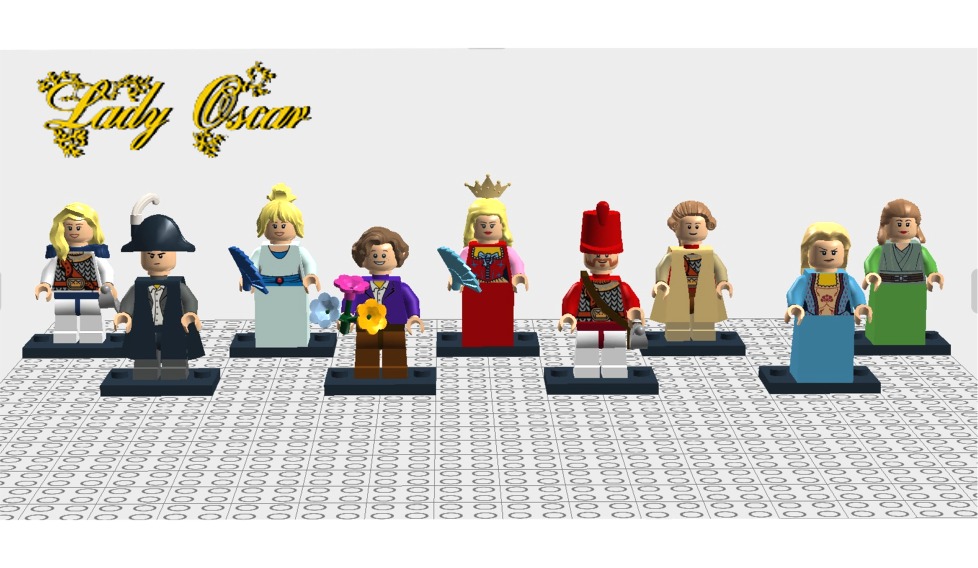 MINI FIGURES (from left to right):

LADY OSCAR (white royal uniform and blue ball gown)
Born the last of five daughters to the Commander of the Royal Guards, General François Augustin Regnier de Jarjayes (a real historical character), she is raised by her father as if she were a boy in order to take his place and command the Royal Guards after he retires. At the age of fourteen, as soon as her basic military training is complete, Oscar is given the task to protect the Dauphine Marie Antoinette when she arrives at the French Court.
She dislikes court intrigues, but remains there out of loyalty to her father and her friend, Marie Antoinette. At one point, Oscar falls in love with Fersen, who has a forbidden love for Marie Antoinette.
Later in the story, Oscar learns of the political ideals of the Revolution and that the royalist regime is corrupt. As the French Revolution is about to begin, Oscar refuses to sedate tumults occurring in Paris. She renounces her status and her regiment joins forces with the people marching to the Bastille.

QUEEN MARIE ANTOINETTE
Marie Antoinette is one of the main protagonists of the manga and anime series Lady Oscar, created by Riyoko Ikeda, and is loosely based on the historical figure of Marie Antoinette Habsburg-Lothringen. The character follows quite closely the true story of the Queen of France. The only fictional element is her friendship with Oscar François de Jarjayes. The author had initially assumed as the main character of the manga only to be eclipsed, in the second part of the work, by Oscar.
Daughter of Empress Maria Theresa of Austria, was given in marriage to the Dauphin of France, Louis Augustus to establish a political alliance against Prussia and England, being thus thrown into a whole new reality for her. Extremely flawed, but good-natured, because of his inexperience and his character, initially a bit 'frivolous, ends up being immediately involved in gossip and intrigues of Versailles.
She became queen at the age of eighteen, after the death of Louis XV, between the hopes of the people. However, despite the wise advice of Oscar, faithful captain of the royal guard and confidant of the queen, Marie Antoinette was surrounded by friends, primarily the Countess de Polignac, who exploit their position to their advantage and end up distracting it from its responsibility to supreme and, consequently, to make her hate by the people. The scandal of the necklace precipitated the events that led to the revolution and the tragic end of the sovereigns. Marie Antoinette, despite the three children born to the king, had one great love: Count Fersen. Met during a masked ball, where the queen sneaked unbeknownst to all, Marie Antoinette and Fersen wove an affair but became the subject of gossip throughout Versailles. The relationship ended when Fersen, for the sake of the queen, chose to embark to fight in America and get away from that relationship impossible. Their last meeting was yearning after the arrest of the rulers, when Fersen tried in vain to help the royal family to flee.

KING LOUIS XVI
Louis XVI of Bourbon, said the Desired (Versailles, August 23, 1754 - Paris, 21 January 1793) was King of France from 1774 to 1791, from 1 October 1791 he reigned under the title of "King of the French" until August 10, 1792 , the day of his testimony.
Initially loved by the people, his indecision and his conservatism led the people to rifiutarloin as a symbol of absolute power exercised by the European monarchies.
Today, historians generally judge Louis XVI an honest man and sincerely desirous of the good of the nation, but inadequate for his extreme conservatism and his indecision, the difficult task of reforming the monarchy, for fiscal consolidation and to give the country the democratic institutions.
the completion of his education was secured by the noble sport of fencing, horsemanship and dancing.
Luigi was very popular and accommodating to social reforms, political and economic revolution.
Recent studies have concluded that Louis was subject to serious moments of indecision, during which his wife, Marie Antoinette much less popular, in fact assumed the responsibility to act for the Crown.
The surrender of Louis XVI to his wife made ​​him feel superior to the latter king.

DUCHESS OF POLIGNAC
Yolande Martine Gabrielle de Polastron, Duchess of Polignac (8 September 1749 – 9 December 1793) was the favourite of Marie Antoinette, whom she first met when she was presented at the Palace of Versailles in 1775, the year after Marie Antoinette became the Queen of France. She was considered one of the great beauties of pre-Revolutionary high society, but her extravagance and exclusivity earned her many enemies.

ROBESPIERRE
Maximilien-François-Marie-Isidore de Robespierre said the Incorruptible (Arras, May 6, 1758 - Paris, 28 July 1794) was a politician, lawyer and revolutionary France. It is probably the best known and one of the most controversial stars of the French Revolution and the Terror.

COUNT VON FERSEN
Hans Axel von Fersen is a young Swedish Count, the eldest son of a senator of noble extraction of the kingdom, with a great look and a noble soul. His physical gifts and his high social position make the heart beat of all the ladies of Versailles, Oscar and Marie Antoinette included. He knows the Queen Marie Antoinette during a masked ball.
When the situation becomes untenable and Fersen realizes that his love for Marie Antoinette unfeasible helps to throw mud on the figure of the queen, already heavily compromised by the extravagance of the court, he decides to stand back and get away as much as possible, starting for 'America and joining the soldiers who fought for American independence from England. The count will return to France after the revolution started and help the royal family in an attempt to escape, but he was intercepted by the revolutionaries. The last farewell between Fersen and his beloved queen will be a fleeting glance.
Fersen will be the subject of another impossible love, that of Oscar François de Jarjayes, captain of the royal guard. The strong unrequited that Oscar has for him will bring it to leave the royal guard and moved to the command of the soldiers of the National Guard.

COMTESSE DU BARRY
Jeanne Bécu, comtesse du Barry (19 August 1743 – 8 December 1793) was the last Maîtresse-en-titre of Louis XV of France and one of the victims of the Reign of Terror during the French Revolution. She was the antagonist of queen in the Palace of Versailles