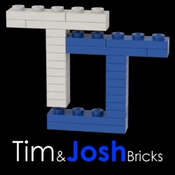 By TimAndJoshBricks
74 comments
For all the Age of Empires lovers, here is a brick game version to be played between 2 to 4 people.
AOE/AGE is one of the classic RTS games, and arguably the best RTS game. As revealed on 10 April 2021, Age of Empires IV is arriving in autumn 2021, which makes this a perfect time to launch my idea.
Why Brick Edition?
Lego bricks are perfect for making a game where one can gather various materials, and build various buildings. It also enables one to make a varying array of terrines, making each game fresh. With all the HD editions and updates, having a Brick Edition in the mix seems right :)
Overview of the game
This is a turn based strategy game, where each round consists of three stages. The stages are Gathering, Building and Moving. The amount of actions one can make in a round depends on the population of your nation, and each character/building can only act once a round.
At Gathering stage, players take turns making characters gather resources.
At building stage, players take turns to buildld buildings, research, or produce units (town folk, infantry, and cavalry).
At moving stage, oplayers take turns to move units and attack. When attacking, one rolls the dice, to see if their attack succeeded.
One can make as many actions in each stage, but the total amound of actions in a round is limited by the number of the nations population. Once the round if finished, the next round starts from the person on the left.
The game finishes when the victory objective has been met.
Here are some options:
Buildings
Town Center - can build town folk.
Barracks - can build infantry, archers, and cavalry.
Blacksmiths - can upgrade the attack and defence of army. This is tracked with the minifigure on the players board.
Tower - can attack units on neighboring tiles, but not on own tile.
Wall - blocks passage
Farm - producers food.
Resourcs
Food - gathered from farm
Wood - gathered from woods
Stone - gathered from quarry
Units (max no.)
town folk (5) - can gather resources and build buildings
infantry (5) - can attack units on same tile
archers (5) - can attack units on neighboring tiles
cavalry (5) - can move two tiles at a time and attack units on same tile
king (1) - can only move
Number of actions per round
If under 5 units, the number of action a player can take is the same as the number of units they have. For more than 5 units, the player can have an extra action for every 3 units. i.e. 7 units (5+2) will give 5 actions, but 11 units (5+3+3) will allow 7 actions.
Other modifications
With two sets and few extra plates, one can make this into an 8 plater game.
One can play a shorter game with all buildings already built in the begining.
A water terrin will also be easy to add.