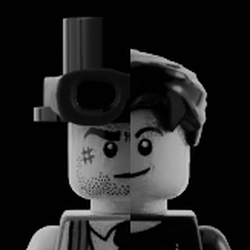 Lo, beyond the River Blapp

By shadowed steed with shadowed tack

– Andrew Peterson, On the Edge of the Dark Sea of Darkness

From Andrew Peterson's fiction series The Wingfeather Saga, the Black Carriage was used by the Fangs of Dang to capture people (primarily children) and take them to Castle Throg to be turned into new Fangs.

As a set, this model would contain the carriage, a horse to pull it, and a "shadowed driver driving." It could also include one or more black crows, which hover above the Black Carriage in the story. This reproduction of the Black Carriage features two fully functioning doors and an interior containing two benches. The yoke of the carriage utilizes a 2x2 turntable, alowing the horse to move from side to side.

This model was created in Lego Digital Designer and rendered in Mecabricks.

If you are interested in learning more about the Wingfeather Saga, check out the official website here.