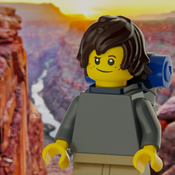 By Vince Guy
14 comments
This is the final chapter of Penguin Quest. If you're curious what this goofy idea is about check out Chapters 1 and 2.
Peet sees the Temple at the tip of a jagged mountain. Perilous winds force Herbert to lower his airship beneath the clouds. Peet must scale the rest of the peak on his own. But Peet soon find's that he isn't alone on the trail of splintered planks and rickety ladders. Baron Von Bill is close behind.
As the two rivals climb it becomes clear that the icy rock, howling wind, and perilous drops are their real enemies. Then, when a wooden platform breaks beneath Baron Von Bill, Peet is forced to make a choice.
Reaching out his flipper, Peet chooses to lose an enemy and make a friend. The two unlikely companions reach the summit where they find a Hockey Arena protected by ghostly Penguin Guardians. Peet sees his father trapped in one of the cages above. He's turning into one of the Guardians.
The Golden Fish hangs at the other end of the arena. Von Bill rushes across the ice to retrieve the treasure but the Zamboni Dragon scoots out and chases him back. The Guardians can only be defeated in a fair game. The Zamboni Dragon cleans the ice for the match to begin.
Von Bill and Peet work separate levers to move the penguin statue back and forth then launch eggs towards the goal. Peet and Bill have three eggs to fire before the Zamboni Dragon locks them away to become future Guardians.
After two misses Peet and Bill settle their differences and work together to make the perfect shot. The Guardians step aside and the cage holding Peet's father opens.
Reunited, father and son retrieve the Golden Fish. Then all three adventurers grab a snowboard and carve down the steep slope to hit a sweet jump then land safely on the deck of Herbert's airship.
It's time to go home and celebrate.
This set has roughly 1400 pieces, but the mountain interior could be simplified to lower the count a bit.
I had a lot of fun creating and sharing these ideas, I hope you have enjoyed Penguin Quest. Thank you!