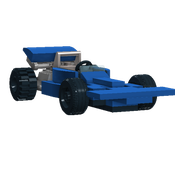 In 2017, the regulation of Formula 1 changes drastically, and it is expected that the time reduction of about 5 seconds per turn is reduced for each course.
By this regulation change, each team has a new car shape.Particularly characteristic changes in shape are engine cover and wing behind the engine cover.

Therefore, this time, using the Speed champions package (75879 SF16-H) just released, we changed to the model of SF70-H(2017)
I added an engine cover called a shark fin and a wing called a T wing behind the sharkfin,How beautiful this color of sharkfin is !

Because I am Raikkonen fans, car cameras turned yellow.

I expect Raikkonen 's world champion for the first time in ten years since 2007.