Usnavi's Bodega (From In The Heights) 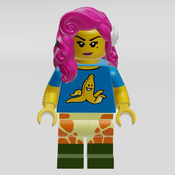 By AdmirableBalloon025
18 comments
"Lights up on Washington Heights, up at the break of day".
You wake up, and you've got this LEGO set with which you're gonna play.
This is a LEGO version of Usnavi's bodega from the musical In the Heights by Lin-Manuel Miranda. This set would make a great collectors' piece for fans of the musical/movie as well as general musical theatre fans and anyone who wants to add a fun modular-style building to their collection. It incorporates many of the places and characters from In the Heights, giving builders the ability to recreate a variety of scenes. There are also many hidden details located throughout the set.!
The building consists of two floors and a roof, each of which can be lifted off individually.
First Floor (photos 1-6):
The bodega itself makes up the first floor of the building. Inside, you'll find the defining features of Usnavi's store, including:
The exterior of the first floor features even more details from the film version of the movie, including:
The rear exterior of the store is decorated with flags, a table, and chairs, making it the perfect spot to recreate the "Carnival del Barrio" scene.
A staircase/fire escape leading to the second story of the building also allows builders to recreate Benny and Nina's iconic scene on the fire escape!
Second Floor:
The second floor of the building, accessed by the rear staircase, is composed of two apartments behind a classic New York City brownstone façade.
The first apartment (photos 7-10) is modelled after Usnavi's home in the film version of In the Heights. It includes:
The second apartment (photos 11-15) is modelled after Nina's home. It includes:
Minifigures:
This set includes six characters from In the Heights, including (pictured from left to right):
Thank you so much for reading this lengthy description! If you like this set, please support it! Thanks again! :)