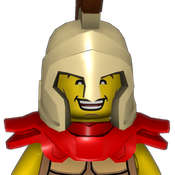 The main build is a Stone Talus. It is one of a few boss enemies in the Legend of Zelda „Breath of the Wild“. To fight the Taulus Link has to get him fall over, so that he could climb on his back in order to hit his only week spot -  a black crystal on his backsite.

My build of the Stone Talus is realy moveabel and poseabel for the hip and the shoulder jounts and the mixel ball joints at his feet. To attack Link the Stone Talus can throw his left arm which is only connected with one technic pin.

The small side build is a guardian ruin which can be found all over Hyrule.
Mostly they are not able to walk and can only attak with a laser in their eye.

So this guardien has only two legs and has a sprig loaded shooter in his body to represent the laser.

I have build this set because because I am a big fan of lego and the Legend of Zelda, so I tried to connect both worlds.

This Lego set  will be good either for Afols and kids.

It is good for display and you cold also play with it because of all the play-fetures and the stability.

I hope you like my idea and support it.

Also it is my first real moc.