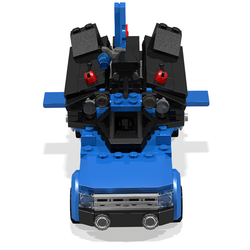 This is Buckaroo Banzai's vehicle to travel to the 8th dimension. Its 'The Jetcar', Including it's oscillation overthruster!
In the 1984 movie 'The Adventures of Buckaroo Banzai Across the 8th Dimension' Buckaroo Banzai (Peter Weller) has to save the world by defeating a band of inter-dimensional aliens called Red Lectroids from Planet 10. (Which are all called John)

The Jetcar is a modified Ford F-350 pickup truck powered by a jet engine and capable of exceeding Mach 1. The car is also equipped with a secret device called an "oscillation overthruster", which Banzai and his associates hope will allow it to drive through solid matter.

The Lego version captures a lot of detail from the movie model and even fits a minifig! Dr. Buckaroo Banzai ofcourse. (physicist, neurosurgeon, test pilot, and rock musician) This model would be a great addition to every Lego world or movie car fanatic!

Also, check out my other Lego Ideas projects!