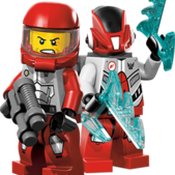 It's basically something based in the furure, It's a robot uprising and the samurais have to stop them. The set contains the following:

Please support it and if you don't like it, please tell me why so I can fix it. If this gets 10,000 supports I will make more sets including the kraken, the mole and the dragon mech. Again please support it.