Knockout!: It's Cuphead and Mugman vs. Mr. King Dice! 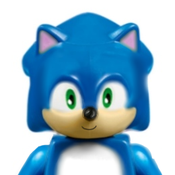 Stage a fight between brothers Cuphead and Mugman versus Mr. King Dice. Avoid Mr. King Dice’s cards as you jump and blast your way to victory! Who will win? It’s up to you to decide!

~By clicking 'support', you can help make this project a real LEGO set!~
As a bit of background information for those who might not know, Cuphead was developed by an indie Canadian video game development team: Studio MDHR. In the game, up to two players control Cuphead and his brother Mugman to fight through several levels and boss fights.
In this project, the build is based on one of the final bosses in the game: Mr. King Dice. Inspired by the interesting and standout level design, I wanted to build this specific battle out of LEGO pieces and Mecabricks, an online LEGO building website, allowed me to do just that. Its wacky design proved to be a challenge, but the final build translated well to LEGO.
The set consists of about 929 pieces and includes 2 buildable figures: Cuphead, Mugman and a minifigure version of Mr. King Dice. Many of the smaller builds can be attached to the main build, such as the cards and a buildable Cuphead faceplate to place the figures on.
Thanks for checking out my project! Please consider sharing it on social media platforms to spread the word! 10,000 votes could make this project into reality!
#LEGOCUPHEAD