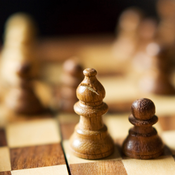 This puzzle-lock box is both my second submission to Lego Ideas, and the second piece to my Impossible Box series. Both boxes (The Impossible Puzle Box and The Impossible Lock Box) are stand alone puzzles, but can join together- as shown in the first picture- to make the challenge even more difficult (the key for the gray box being locked inside the black). And while both have similar working functions, their puzzles are unique of each other.

The prize box of this one is locked in. But if you play it right and find the key hole, the key (when turned counter clock wise) will work together with gears and a lever to unlock and push the box up to where you can get it and finally reveal the prize.

The rules for this box are the same as the first one but with one additional rule: first, there are three tools, all of them to be used only once. Second, the box must remain upright. No tilting or shaking or flipping upside down is allowed. Third, even though it's made from Lego bricks, you cannot break it. The box, despite being full of sofisticated funtions, is sturdily built, so if you break it you lose. This rule provides a bit of incentive for people to exercise a little caution when fiddling with it. And lastly, the key cannot be used until the key hole is found. Whoever can solve the box in three minutes wins. Or if using both, ten minutes.

This box too would help in IQ develpment. In addition to helping with hand-eye coordination and gaining a better understanding of how Lego parts work together, this box would aid also with the development of engineering skills. The finished product makes for great fun with family and friends, and would improve problem solvng skills as each newcomer attempts to unlock the secrets of the Impossible Lock Box.

As I said before, this is the second in the series, so be sure to look up the first as well, and thank you in advance for your support on both projects!