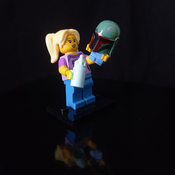 I love the challenge of building lego at micro scale and being a huge Star Wars fan I thought I would try and design some micro scenes based on the Star Wars saga. What better place to start than one of the most iconic moments, the Death Star Trench Run.

A laser turret is firing upon incoming X-Wings while Luke's very own Red-5 X-Wing is flying down the trench itself.

R2D2 is sat in the back lending Luke a vital hand, or should that be droid arm?!

Darth Vader pursues Luke in his own Tie Advanced accompanied by two of the best tie fighters in the imperial navy.

The laser turret can spin around and move its gun turrets up and down but the best thing about this set is that all of the micro ships can come off the base and are solid enough to be played with.

In this scene one of the tie fighters is blowing up however there would be enough pieces to build 2 x tie fighters if you wanted.

I hope you enjoy this set and thank you for your support.