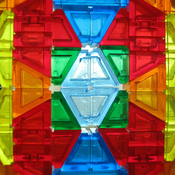 A starfighter designed for both atmospheric and outer space use, the Seahawk was one of the most versatile heavy starfighter/bombers ever created. The four massive jet/ion engines, designed to work within an atmosphere as well as deep space, give the starfighter unparalleled speed and maneuverability. The bomb bay can hold two bombs, which are released at the flick of a switch (video can be seen here), and the starfighter can sit nicely on a display stand*.

For larger images, as well as a video of the model's working "bomb" dropping function, can be found at my Flickr account here.

*Display stand may or may not be included in the final product in the event LEGO decides to produce this.