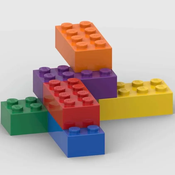 Behold my version of an ancient Greek galley! A Greek Trireme.
I have built this ship because I have not found any which is proportionally and historically more or less accurate. So far, according to my research, LEGO (officially) has not proposed such a ship in this theme and in such detail. So, I have tried my best to meet these requirements in terms of proportion and historical accuracy.
For the building, I have used pictures that I found on the internet as references and starting points. These are pictures of a life-size galley, different wooden models, and of course various unofficial LEGO models which have been built previously by the builder community. These gave me clues and inspiration when I got stuck in the building process.
The ship can accommodate 72 rower mini-figures (perfectly fit in the belly of the ship, under the top deck) plus some more sailors and 1 captain. Additionally (if there is a need), there is still room for about 30-40 hoplites.
Furthermore, I have created a stand. So, once this comes into reality it can be kept as decoration as well.
I find ancient times particularly interesting. But, besides my personal interests, I generally miss more highly detailed ancient-themed models from LEGO's portfolio. Yes, there are a couple of models about ancient Egypt which are truly admirable. And there is the fascinating model of the Colosseum, which looks amazing. But, apart from these, there are still a lot of gaps in ancient times that have not been fully covered yet. I feel like ancient Greece has not contributed to the official ancient-themed models so far. The ancient Greeks were famous for many things; science, literature, and architecture just to mention a few. They were good sailors as well. Their ships were just as iconic and significant as the Acropolis of Athens or the Spartan hoplites and the model which I have built could be a Lego model that embraces this great civilization.