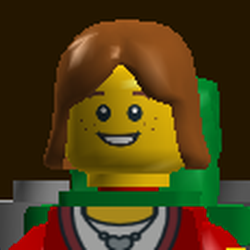 kwilder
8
I have always loved National Parks, and I thought that this would be a great addition to any Lego collection. Particularly with the new line of forest themed Police sets and the Creator Log Cabin, this would be a nice additional feature. You could even include this with a camp ground from the Camper and other similar sets.

This set features two mini-figures, a young camper with a backpacking-pack as well as camera. There is also a park ranger with pack and binoculars (his hat as pictured is not ideal, but this is the closest I could get). There is even a pretty (non-poisonous) snake being studied by the two mini-figures. The number of pieces included in the set is 128. Based on current pricing of the 2012 Lego sets, I would imagine that this set would cost somewhere around $15. The base of the welcome sign is 4x16. The build is fairly standard and could be accomplished by many builders. The wood sign is supported by stone, with alternating light and dark grey simulating stone. The arrowhead feature on the right of the set is built upside down and attached to the main sign through a brick with a post and a brick with a hole. This is shown in one of the attached pictures.

I designed this set using Lego Digital Designer as I don't have many of the pieces of my own. Therefore the pieces included are limited by what is there in the program, so a finished and final product would likely be able to include other features and potentially fewer bricks (potentially decreasing the price). If a wider selection of bricks were available for the finished product, I would prefer the new "brick print" 2x1 bricks available in some of the newer sets. I would also substitute the ranger's hat and perhaps change the color of the camper's camera. Also, The name of the park and the arrowhead sticker are not added to the pictures showing alternate views due to my own lack of sophistication with photo manipulation programs.

Please note: there is no "Wild Wood" National Park, this is just made up. I also used my own picture to be the "sticker" onto the arrowhead logo so that I would not be appropriating another person's picture and property. If there are issues with this park sign being affiliated with the National Park Service, this could certainly be any generic welcome park sign. 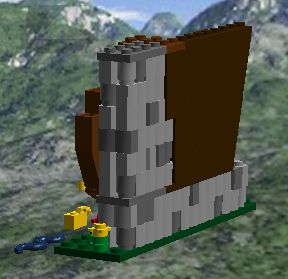 Back of the sign, you can see the simulated brick with the dark and light grey pieces. The arrow head also is somewhat off center of the stone background, as would be common in similar National Park signs which often do not have the arrowhead centered. For stability purposes, the stone of the support structure encroaches on the wood sign for three levels. 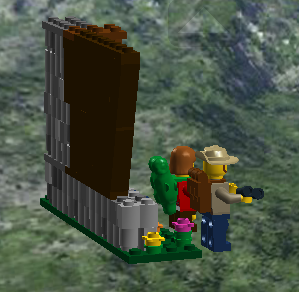 Rear of the sign, you can see the sturdy backpacking-pack for the camper. I would change the hat of the ranger to be a straight brim all the way around. 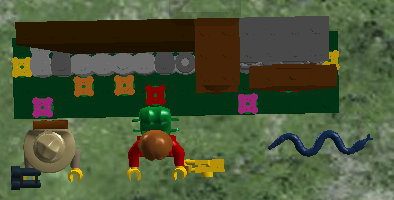 Arial view of the sign showing the space this sign would occupy in your city or forest. Also notice that the arrowhead logo is somewhat off to the right side of the sign. This is so that there is some grey brick visible between the brown post and the brown sign. 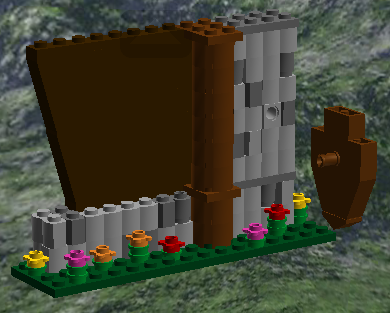 Detail showing the building techniques for the arrowhead. The arrowhead is built upside down, and with the stud placed into the wall.