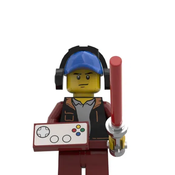 By WinterWolf41
5 comments
Two original BrickHeadz that I have based on Daniel LaRusso and Johnny Lawrence from the 1984 movie The Karate Kid. I hope you like my designs and can see the characteristics that I have tried to include from the actors in the movie in my models.
I have tried to use standard bricks and even used the bandana piece from Ninjago, however the only custom pieces I have used are the stickers on their backs which are the logo's of each dojo that the characters belong to. Hopefully this will do Mr Miyagi proud!
Apologies about the pictures for some reason the upload wouldn't let me crop the pictures properly.