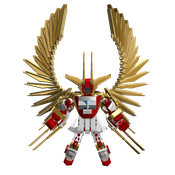 By Zoriphay
10 comments
In the Post-apocalyptical world I imagined: T.T.D., (Timely Transport Division), Is the most important company in the world as they happen to be most efficient in the jobs they're given, though good portion of their success is thanks to the company owner's nephew Gin, who owns "N.W. Docks". The Company's most common truck, (codenamed Sullivan), has a unique bumper design. After employees kept carelessly running out in front of their trucks, T.T.D. was pressured by S.E.E., (Safety Enforcement Enterprises), to take action in protecting stupid people from themselves. T.D.D's "Big Boss" settled the matter by making the front of his "Sullivans" intimidating and deadly. Of course S.S.E. wasn't satisified with this "solution at first, but a few "Test Drives" changed their mind.
"Sullivan includes: opening cab, Detailed interior, Minifigures that fit in cab, removable storage crate, fold up cargo cover, transforming wheels from hover to drive, safety sirens and horns, detailed steps leading into cab, "Cool" golden dragon logo on hood and detailed engine inside.