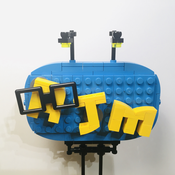 Pop's Chock'lit shoppe is in the small town of Riverdale, where the eighty year old comic book series is centered. Main characters Archie Andrews, Jughead Jones, Reggie Mantle, Betty Cooper, and Veronica Lodge often visit Pop's Chock'lit shoppe where they can eat Pop's good food or listen to the jukebox play its jazzy tunes.
The inside: This set, completed with booths, bar stools, a jukebox and a gum ball machine lets you recreate any Archie comic moment that has ever happened at Pop's. There are six minifigures total, including Archie, Betty, Jughead, Reggie, Veronica and Pop Tate.
Jughead can gorge himself on burgers, hotdogs, malts, shakes, and banana splits. While Archie and Reggie can fight over who they want to share a malt with... Betty or Veronica? Its up to you do decide what happens here at Pop's Chock'lit shoppe.