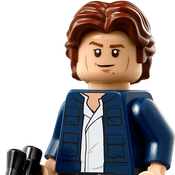 This is a recreation of a sea battle board game in LEGO. The set includes:
- two playing boards (per player)
- box
As well as:
- 40 flame (transparent orange) pieces (per player)
- 82 grey (199) 1x1 round studs (per player)
These pieces symbolize a hit ship, or a miss. The ships are made from a flat 1x1,x2,x3 and x4 plates, with 1x1 round studs with holes on top. This makes it easy to see which ship has been hit, and where your opponent has missed. Per player, there are 20 ships, which come in two colors, one to symbolize your fleet, and one for your opponent. The ships can be placed at the border of the field when there is no game in play. There are two designated areas on the creation, which allows you to store all the loose pieces inside. There is a clasp designed to securely close the box when the game is not in use. The structure by itself is book like, however, the set must be placed as shown in the images above. The two boxes can be detached, as shown in the last three images.
This set is a game for 2 players. It is designed in such a way that the players can sit face to face, or apart. The set is, as shown on the images, colored white and blue, in a sea theme. The colors have been chosen to add some brightness to the set, but not to distract the players. In a closed state, the set is very compact and easy to take with you. The playing fields can also be detached from the box itself if needed. The 2x4 plates on the right side of one of the playing fields can be used to display the amount of ships included, for example on a sticker. This set is intended for ages 8+.