We're Off to See the Wizard - BrickHeadz 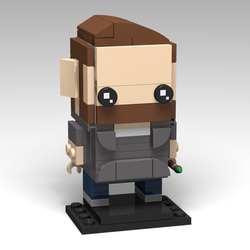 We’re Off To See The Wizard - BrickHeadz

Since 1939, The Wizard of Oz has captured the hearts and imaginations of viewers worldwide.  Nearly eighty years later, this classic film remains one of most beloved movies of all time by every generation. In this partner build from Kendall Brown (@headzsets) and Scott Moore (@jackmojo1) we strove not only to create five incredibly detailed BrickHeadz models of the characters, but also portray their journey through the wonderful land of Oz.  So, follow the yellow brick road with us!

Here are the details:

Thanks for looking, supporting, and sharing!

*Submission photos are labeled as “concept rendering" and "physical build".  The renderings show our complete vision for the final build including new brick colors and tiles.  The physical build represents the progress of our physical model so far with available pieces.