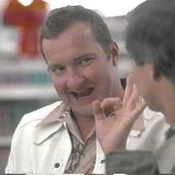 The Wagon Queen Family Truckster is the family car that transports the Griswolds across the US in the 1983 comedy classic “National Lampoon’s Vacation”. Since the film’s release, the Truckster has gained its own cult following as one of the most recognized vehicles from pop culture cinema. With this in mind, why not capture it in brick form?  This model was built to capture the essence of the Truckster from the distinct paint job to its gas cap on the hood. For added measure we’ve made sure to include Clark, Ellen, Russ and Audrey along for the ride.

As we were wrapping up this model we decided it to make a slight addition so as to capture another iconic scene from the Vacation series. Released in 1989, “Christmas Vacation” has been a staple comedy film during the holiday season.  By making just a few adjustments to the vacation model, we were able to build the massive Christmas tree on the wagon to replicate the one seen in the film. In addition to the tree, we included wardrobe change for Clark & Ellen, and a complete overhaul for Russ and Audrey (to mirror the films).

If you are a fan of the films give this model a vote so we can bring it to life. In the immortal words of Ed, the car salesman, "If you think you hate it now, wait 'til you drive it."