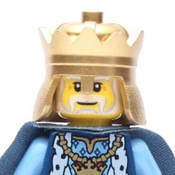 By ETLordOfSquirrels
13 comments
The story:
Lords and Ladies, meet poor King Phillip.
The wealthy lord of Castle Comfee and friend of all, King Phillip has decided to visit his royal subjects, leaving his castle to the caretaker. Little does he know, the caretaker is sick of mucking out the stables, and has plans to take over the castle for himself!
With the evil dragon knights' help, the castle caretaker was able to take over the castle while King Phillip was out. Arming themselves with whatever they could find, the caretaker and his cohorts prepare for the King's return.
When King Phillip returns with his guard, he finds himself locked out with no way back in. His terrible foes have even taken control of his huge catapult and are launching anything they can find at him, including horse droppings from the stables (gross!).
King Phillip has very little time to decide how to proceed, as it looks like one of the enemy knights is advancing! It will take all his strength and wisdom to reclaim his castle.
The set:
(General)
Join either King Phillip or his foes as they struggle for control of Castle Comfee. You decide how the battle plays out. Will King Phillip reclaim his home, or will the caretaker and dragon knights manage to keep their prize?
(Brick by brick)
-Outside the castle, a dragon knight has been waiting by a tree for King Phillip to return. A barrel with a beverage on top shows how long he was waiting.
-On the castle battlements, the caretaker waits by a rack of odd tools. From way up there, he can taunt the King and his guard with no fear!
-A folding, removable ladder leads down to the lower level of the castle, where there's a cooking fire and some shrubs. In the courtyard is another dragon knight with the giant catapult, ready to fire at a moment's notice. In the corner is the King's favorite room; a cozy little library with a hearth to keep him warm.
The history:
I've always been a huge fan of the LEGO universe. From the busy sounds of LEGO City to the magical world of Harry Potter, bricks have brought to life some of my favorite stories to life in a way that is very appealing to me.
The medieval era has always been one of my fascinations, and a used LEGO store recently opened in my area. There has never been a better time to combine two awesome things!
After a lot of brainstorming, I decided there were to main things I like to see in a LEGO set: It needs to look good, and it needs to play good.
In my opinion, a LEGO set should  be a model, but also be easy to play with as well. Finding a way to implement both of these in my design proved difficult, but I'm very happy with the end product, and I hope you are too!
If you aren't quite happy with the castle's orientation, it's no problem! The hinges allow it to have several different layouts, each of which will show the story of King Phillip in another way. With the castle's flexibility, you can make King Phillip's story your own.
Thank you for taking a look! I hope you've had as much fun exploring the model as I did building it :)