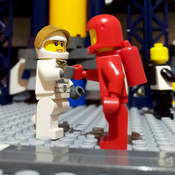 The NASA Vehicle Assembly Building, at NASA's Kennedy Space Center is a building designed to assemble large space vehicles, such as the massive Saturn V and the Space Shuttle. The future Space Launch System will also be assembled there.
It is one of the largest buildings in the world by volume.

I conceived the set as a definitive meeting between the different LEGO Space sets, so you can find  classic spacemen, the futurons, the Alien Conquest spacemen, the City spacemen etc. The right side of the building can be opened to allow you to play with the set.
Inside, I have insert an automated station for rocket construction, an office, an alien autopsy room and a metal detector.
The rocket inside the set is complete and has a light brick to simulate the reactor fire.
The set is built on 48x48 gray baseplate and could be placed in a City diorama or in a Classic Space diorama, replacing the NASA sticker on the front panel with the Classic Space logo.