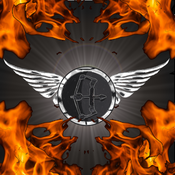 "Sunrey Manor" (Pronounced: "Sun ray") The story behind the name: The home was done, and I needed a name, this was not based off of one concept, so I can't just use a name that wasn't mine. The home seemed "Sunny" when I went into the different displays. So I wanted something to deal with the sun. Also I did research that the name would be with the last name of the owner/master of the home. So I thought of the following: Sun dry, Sun day, Sun ray. And I really liked the sound of "Sun ray" and changed it to "Sunrey" and added Manor!

Sunrey Manor is a Victorian styled home with no specific era. It includes four female characters and four male characters.
(Betsy, The Cook), (Nancy, The Head Maid), Maiden Barb, Maiden Margaret, a head gardener (Roach), a Butler (Jeffrey), Master Neal, and Mr. Bail (Part time Cook. (What does he do with his other time?)). Some of the names are based off of some of the characters from a book I'm writing.

There are 5 rooms in the home: The Kitchen, The Dining room, The Living Room, The Bathroom, and The Bedroom

The street can connect and disconnect from the Manor if wanted. Thanks to pin connectors. (Not shown in pictures)

The doors in back can open and close for a type of doll house feature. The roof can open some for easy access or storage in the attic. (Not shown in pictures)

The tip of the turret can be taken off for easier access to the bathroom. (Shown in a picture)

If buying multiple, they can be placed side-by-side and across from eachother to create a fun neighborhood!

I think this should be a set because you don't see too many victorian era sets from Lego recently.

With your help, Sunrey Manor is ready to be in your collection!