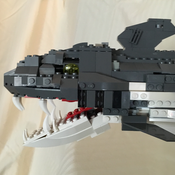 Hello everyone, this is my project, Great White Shark. It is 17'1/2 inches X 4 inches X 5 inches. This model took me 3 months to develop and its about 800-950 pieces. I took inspiration from the "Lego Birds" Ideas model set and wanted to make something related to an animal. So instead of a land animal I chose an underwater animal and that's where the Great White Shark came to mind.

I wanted to add as much texture as i could to "bring the model to life" I added many slope pieces to create the body of the model. I also added Tiles in random spots to give the model a more rugged look. The black tiles near his snout represent gills for breathing underwater as well as a way to cover the insides of the model.

The fins of the model all are able to move except for the top fin because I wanted to put as much character into that fin as I could. For that fin I added More slope pieces as well as some studs for character and grill tiles to give it a tougher look.

I tried my best to mix dark grey pieces and white pieces together because an actual great White Shark usuallyhas a darker top  and a whiter bottom for his body. So, I blended the two colors together but also sometimes making the dark gray pieces go lower or the white pieces higher to give the shark a unique look and show that every shark is different in the way they look.

I created a basic stand to hold the shark in place. It was mostly made of Technic pieces but also Lego Plates to hold the stand together. It was designed to have 6 claws to grip the model in place and the two claws in the front of the stand have a Technic beam holding then together so the mouth of the model will be held in place.

Overall thank you for reading and looking at my model and imitation or the Great White Shark. Lets hit 10,000 supporters to show off this massive beast and the king of the sea...