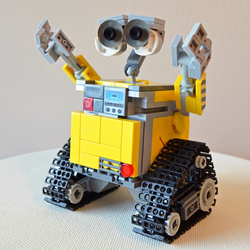 Thunderbirds was a British science-fiction TV series popularized in the mid 1960s. Set in the 2060s, the show follows the adventures of International Rescue, a life-saving organization equipped with advanced land, air, and sea craft. The original series was broadcast in over 66 countries, and inspired a live-action movie in 2004. More recently, Thunderbirds was remade into a new animated TV series in 2015. This model is based on the Thunderbird 2 from the new TV series.

Please also check out and support my other projects!

This model was built using LEGO Digital Designer (LDD). As aforementioned, it is based on the redesigned Thunderbird 2 from the 2015 series (rather than the original 1960s version). The main reason being that the original version was a lot more contoured and thus was considerably harder to replicate in LEGO at this scale. Nonetheless, the general shape and main characteristics of both variants remain similar. Some of the key features of this LEGO model include:

Comments, questions, and constructive feedback of this model is greatly appreciated!