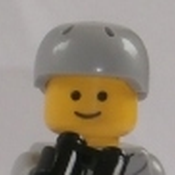 After getting reinvested into the LEGO Blacktron theme with the Scouttrax, Trooptrax and Liberator, it was a given that I also had to build a Blacktron spaceship, Spaceship, SPACESHIP!!! I wanted something big like a command ship but not so big that I would have to spend a small fortune of Bricklink. So I opted for a frigate class ship. It is not difficult to see where the inspiration for this build came from, I think. It had two main sources of inspiration, the first obvious being the Lockheed SR-71. The second is a bit more obscure but I hope fan of the Star Trek universe will still notice it.

This is the Blacktron Blackbird a Blacktron C3 (command, control and communications) frigate. Designed to act as a forward HQ for an AO (area of operations). As most ships in the Blacktron fleet, it is fast, heavily armed and cool looking as only Blacktron can. It has two modes of operation: it's standard cruise mode in which the ship is one long sleek craft. And then it has a battle mode in which the front cockpit detaches and acts as a multipurpose fighter/bomber. The fighter is called the Wasp it has a variable-sweep wing which can be completely folded backwards. When the fighter detaches, the main ship is controlled from a secondary cockpit slightly farther back.

Have to say I had a lot of fun making this build and also making some of the images. All my other MOCs since my dark age rely heavily on LEGO Technic, all of them are remote controlled. This is quite the opposite. Hardly any technic involved here. Nor any complex mechanisms so I was able to fully enjoy the design process, which was a lot smoother than normal. Still planning to expand my Blacktron forces further.