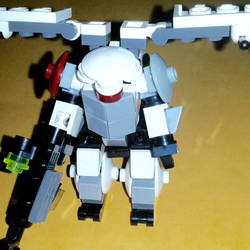 In this kit of over 150 parts you can build the three modes of the veritech or valkyrie, the fighter, the guardian and the battleoid modes will hopefully retail for $25-30.  A standard set will be the tan version in all three modes.  A special white and black set is envisioned as well as a mostly white with red stripes.  Oh and can't forget a solid blue version as well.

The veritech or valkyrie were created in response to the crash landing of the Super Dimensional Fortress (SDF) -1 in which the remains of the Zentradi, 50 ft tall warrior giants are found.  In order to combat these giant and their Battle Pods, a variable fighter, the veritech or valkyrie were created.  A fighter that could fly in the air or in space equally well.  However, it could change into a battleoid mode to be able to go hand to hand with the Zentradi warrior giants.

The Zentradi Battle, Recon and Arty pods can also be found at: